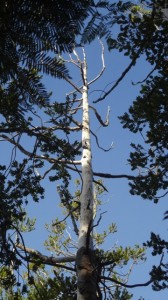 http://www.biologicalheritage.nz/ one of only six successful projects out of 111 applications.

Their exciting new project Kauri RescueTM otherwise known as the Community Control of Kauri Dieback: Tiaki mō Kauri seeks to engage the public in refining a new citizen science tool for the treatment of Kauri Dieback Disease, which is decimating kauri forests in northern New Zealand.

The project team will recruit private landowners to work alongside scientists to treat their own trees with a chemical called phosphite which has shown great promise in Kauri Dieback Programme-funded scientific trials, by enabling kauri to fight back against the Phytophthora agathidicida pathogen that causes the disease. The initial pilot study will involve a small number of private landowners to test and refine the methodology before expanding this to a larger group in the second stage of the project.

The project will also encourage landowners to test other treatment techniques, encouraging both western science and mātauranga Māori methods, rigorously monitoring results and collecting data on all treatments so that their efficacy can be determined.

Project Team Leader Dr Ian Horner of Plant & Food Research is delighted at the opportunity to take his research to the next level and engage the public in actively developing the treatment tools themselves.

“We hope that people will find this opportunity empowering and a positive step forward in the fight against Kauri Dieback Disease. Working together to develop and test these tools and feeding results into a wider research pool will accelerate development of robust methods.  Thus, in the near future we could have effective treatments that the public can apply themselves and support others in their community to treat their own trees” he said.

The Kauri RescueTM team has already started work by running a community kauri dieback survey in affected areas to find out how the public feels about the effect of the disease and the current efforts to control it. Anyone can complete the survey which is at www.kauridiebacksurvey.org.nz

The Kauri RescueTM project will be formally launched at a public event to be held at the Titirangi War Memorial Hall on Thursday 9 February 2017 at 7pm. Anyone concerned about kauri dieback is encouraged to attend.

The Kauri RescueTM  Team is: