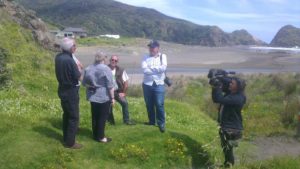 Community organisations and firefighters throughout the Ranges say that every year bush fires threaten people and property, destroy hectares of native bush and threaten protected native animals and plants because of the irresponsible use of fireworks.

“The pressure on volunteer rural fire services and local populations in isolated areas such as Piha and Karekare is unfair and unnecessary”, says Waitakere Ranges Local Board Chair Sandra Coney.

And the area’s combined Residents and Ratepayers Group representing the Heritage Area from Titirangi to Piha and Swanson says local MP for Helensville, Prime Minister John Key, has refused to discuss the issue or take action on fireworks.

Ms Coney wrote to Mr Key requesting a discussion on the regulation and sale of fireworks because of the risk of fire and threat to life, property and wildlife in the Waitakere Ranges Heritage Area.

Mr Key replied to Ms Coney’s letter saying that “there are no current plans for further restrictions [on sale of fireworks] and that the Local Board should discuss regulation with the Department of Conservation.” However, DOC has no jurisdiction in the Waitakere Ranges Heritage Area.

The Combined R&R Group, comprising representatives from 13 communities in the Waitakere Ranges Heritage Area, think the Prime Minister needs to show some leadership on the issue in his own electorate.

Chair and local fire brigade volunteer Kubi Witten-Hannah says: “Our communities are having to police and regulate the use of fireworks in these isolated and rugged settlements themselves in order to prevent disasters caused by people from outside the area letting off fireworks at baches and beaches. At Piha there have been several major fires over recent years caused by fireworks and we are very lucky no one has been killed. If something isn’t done, it’s only a matter of time.”

The group would like to see improved regulation on use and tighter restrictions on the private sale of fireworks.